Global EV sales forecasted to rise 43%, reaching around 9.3 million units in 2022, despite the Russian Invasion of Ukraine and China lockdowns

Global EV sales forecasted to rise 43%, reaching around 9.3 million units in 2022, despite the Russian Invasion of Ukraine and China lockdowns

The global car market has seen a 9% decline due to the persistent supply chain issue, while the global electric vehicle (BEV, PHEV) sales has expanded by 76% year-on-year in January-March 2022. Compared to the previous quarter from October to December in 2021, though, the global EV sales has declined by 12%, recording approximately 1.97 million units. The global EV penetration rate has slightly decreased (-0.7%p) from the previous quarter, landing at 10%.

Despite the Chinese government’s cut in subsidies for electric vehicles and major lockdowns following a resurgence in Covid cases since March, the China market has seen a 143% increase in the electric vehicle sales compared to last year, recording 1.1 million units, and a 17% increase in the EV penetration rate thanks to strong sales led by the Chinese makers – BYD, Shanghai GM Wuling – as well as Tesla.

The European market, however, has been in under a heavier burden due to the continuous semiconductor shortage and the Russo-Ukrainian war. While Europe’s EV sales volume in Q1 2022 has seen a 19% YoY growth, its QoQ sales volume declined by 22%, recording 570,000 units. The EV penetration rate throughout Europe recorded 16%, 3.8%p lowered from the last quarter from October to December in 2021.

Propped up by a record-high sale by Tesla, the US market broke the record again in Q1 2022 with its EV sales increased by 63% year-on-year and by 5% quarter-on-quarter, recording 220,000 units. The EV penetration rate has risen to 6% in the US. 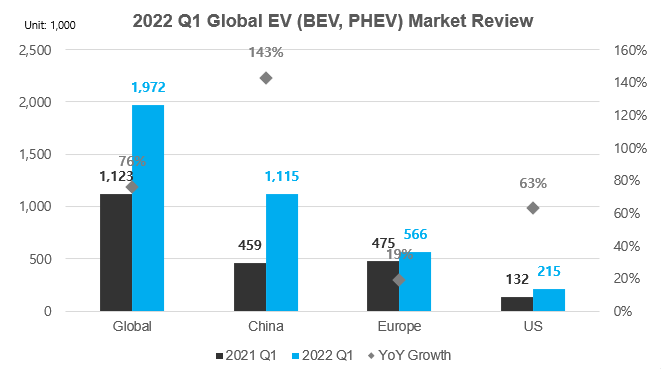 Meanwhile, the global EV market in 2022 is expected to go through sales decrease in Q2 given the influence of the Russo-Ukrainian war and the lingering supply chain issue, which will continuously disrupt the vehicle production in Europe, and of course, China’s strict zero-COVID policy. All of these will lead to a 5% downward adjustment of the global EV sales from the previous forecast, equivalent to approximately 9.3 million units (YoY +43%). 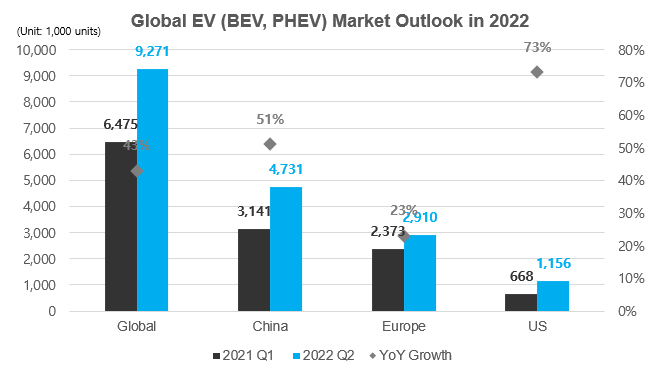 Due to stricter lockdowns in major cities imposed by the zero-COVID policy, the Chinese market is expected to see a slight decrease in electric vehicle sales in Q2, but, from the latter half of 2022, the market demand is expected to rebound given new model launches scheduled in the second half and the predicted last-minute frenzy for EV subsidies that are due to expire at the end of this year.

In Europe, disruptions are predicted in car manufacturing due to volatile situations in and outside the continent. However, the European market is still expected to see an increase in the electric vehicle sales propped up by the operation of Tesla’s Gigafactory in Berlin and new model launching plans of the European OEMs to meet consumer needs and environmental regulations.

The US market is also expected to have more EV sales with the implementation of President Joe Biden’s environment policy, Tesla’s sales expansion based on the operation of Texas Gigafactory, and positive market reactions towards electric pickup truck models launched by Rivian, GM, and others.