LG Chem has continued to grow rapidly by maintaining the first place in battery shipment for global electric vehicles (EV, PHEV, and HEV) that were sold during January ~ August 2020. Samsung SDI and SK Innovation also held the fourth and sixth place, respectively. All three companies remained firmly in the top 10 position. Despite the impact of the Corona virus, the three Korean companies are continuing to grow.

During January ~ August 2020, the total amount of global battery shipment for electric vehicle was 64.7 GWh, down 9.9 percent from 71.8 GWh year-on-year, because demand for electric vehicles decreased in the first half of this year, especially in major markets such as China and the U.S.

Major companies in Japan and China, such as CATL and Panasonic, are mostly still in reverse growth. However, CALB is the only Chinese company that showed rapid growth rate.

In comparison, all three Korean companies posted double-digit surges, consolidating their position in the market.

SK Innovation’s shipment was 2.7GWh, which has more than doubled year-on-year. 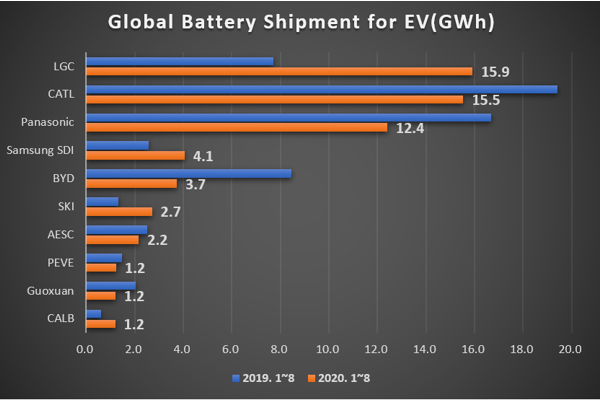 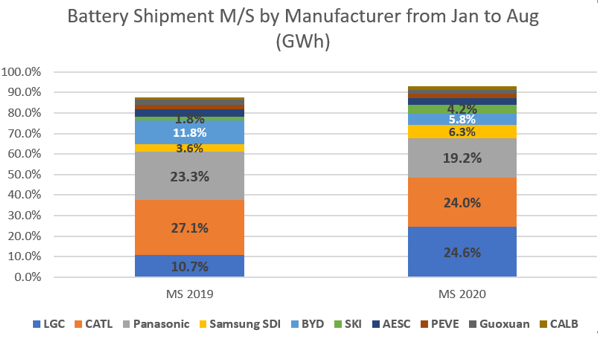 All three Korean companies took total 35.1% of the market share from 16.2% year-on-year.

Overall, the totaled market share of the top six companies, including all three domestic companies, took 84.1% of market share, up 4.1% compared to the period of January ~ August 2019 (80.0% CATL, Panasonic, BYD, LG Chem, Samsung SDI, and AESC). From this, we can see that the gap between top companies and the others is widening. Kenny Kim, CEO of SNE Research said "As certain top companies are increasingly dominating the global electric vehicle battery market, polarization is becoming more serious across the industry," He added that it would be even more difficult for non-mainstream or start-up companies to establish their market positions in the future. 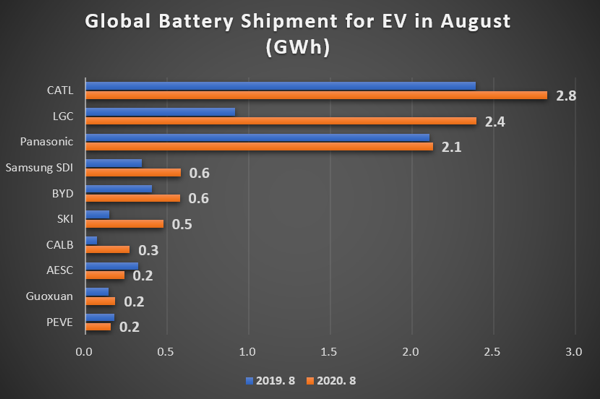 Meanwhile, global battery shipment for EV increased 41.3% and reached 10.8 GWh in August 2020, from 7.7 GWh year-on-year. While the Chinese, U.S. and European markets all grew by more than two digits, and many companies including Korean three companies led the rapid market growth.

Despite the Corona crisis, the three Korean companies have steadily defended themselves. Moreover, there is the possibility that they may gradually enter a phase of high growth. To support this, they need to closely monitor the market flow and actively to enhance competitiveness and to inspect growth engine.

[2] Battery usage for Electric Vehicle registered in the period