Chinese EV (BEV+PHEV+HEV) battery usage in August 2020 have increased to double digits year-on-year. It increased since July 2020, breaking the decrease from August 2019 to June 2020.

With the calming down of the Corona crisis in China, a significant recovery in market demand that had been shrinking has had a great influence on changes of market trend.

By type of electric vehicle, the battery usage for BEV, PHEV, and HEV jumped by more than double digits, showing an overall increase. 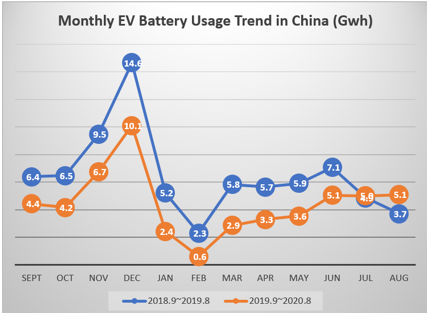 Electric vehicles sold in China was 133 thousand units and grew at 37.5 % year-on-year.

In addition, sales of BEV, PHEV, and HEV have all jumped to double digits. Especially increased sales of BEV and PHEV have expanded the overall battery usage.

A number of companies led the market growth, with the TOP 3 companies in August, Shanghai GM Wooling, BYD and Tesla.

Shanghai GM Wuling maintained its No. 1 position thanks to a surge in sales of ‘Hongguang Mini EV’. BYD returned to second place thanks to strong sales of Qin EV, Han EV and Tang PHEV. Tesla continued to grow as sales of Model 3 jumped more than five times. In addition, Great Wall, leading ideal and FAW-VW also grew by more than three digits.

However, GAC Trumchi, NIO(Weilai) and CHERY showed relatively sluggish growth, and BAIC was pushed out of the TOP10.

Meanwhile, Chinese EV battery usage during January ~ August period of 2020 was 27.9 GWh, down 31.2% year-on-year, because sales of electric vehicles had fallen to double digits every month until June this year.

While local market demand started to recovery from August, monthly growth is expected to continue for the time.