Recently, the secondary battery market is expanding from small-sized IT application market to ESS and EV. Japanese lithium-ion secondary battery manufacturer, Panasonic and Sony that developed and pioneered secondary battery are currently losing the competition against Korean counterparts, Samsung SDI and LG Chem. Furthermore, Chinese manufacturer, ATL, BYD, LISHEN, BAK and others are expanding their market share through support of the Chinese government and infinite domestic market. It is expected that "Secondary battery tripartite composition" will hold for a while, and US auto-makers and battery related company as well as Germany Auto makers and battery related company are looking into large-sized secondary battery production and material market, following the expansion of Electric Vehicle market.

Electrolyte is comprised of solvents, lithium salt and additives. According to the characteristics of the product, electrolyte is to be developed jointly with the lithium-ion secondary battery manufacturer. In the case of IT type small-sized products, it takes three to four months at least to develop, and it takes over a year to develop and evaluate electrolyte used in xEV. In order to respond to consumer needs of diverse products, excellent R&D skills are needed.

Japan and Korea companies mass-produce and supply to global electrolyte market, but it is inevitable to compete against Chinese companies as they are growing rapidly. Panax e-tec and Soulbrain that mass-produce and supply electrolyte could develop along with Samsung SDI, which already obtained the first rank in world market share of lithium-ion secondary battery. In the case of Japan, Mitsubishi Chemical diversified the consumer portfolio that produces small-sized IT type and medium to large sized xEV batteries, and maintains the largest world market share. Kaixin, Guotai, Capchem and other enterprises of China are increasing their market share.

Lithium salt(LiPF6), an important element of electrolyte, is supplied by three Japanese enterprises that accounts for approximately 80% of the supply, and Foosung is the only Korean supplier that supplies Lithium salt(LiPF6) in the Korean market. Additives are added during the process of producing electrolyte to create SEI protective layer, anti-overcharge and improve electronic conducting productivity. Japanese suppliers occupy most of the additive market share, and Leechem and other suppliers of Korea supply additives to the market.

Electrolyte is one of the four main elements that constitute a secondary battery. The proportion of cost of materials from production cost is lower than other three major materials. In order to improve capacity per unit cell of secondary battery, the trend is to increase the amount of anode and cathode materials, and relatively less amount of electrolyte. However, as the expected annual growth rate of IT products by year 2020 is 11.2% and that of xEV is 40.5%, giving a positive outlook on the sustained growth of electrolyte market.

As the use of electrolyte in xEV/ESS large-sized secondary battery increases from 200 to 4,000 times larger per unit cell compared to IT products, securing stability has become a very important issue. Apart from liquid electrolyte and gel polyelectrolyte (polymer) that are already commercialized, research is continued on solid polyelectrolyte that is stable in high temperature. This report conducts an in-depth analysis of the necessity and trend on the development of solid electrolyte. 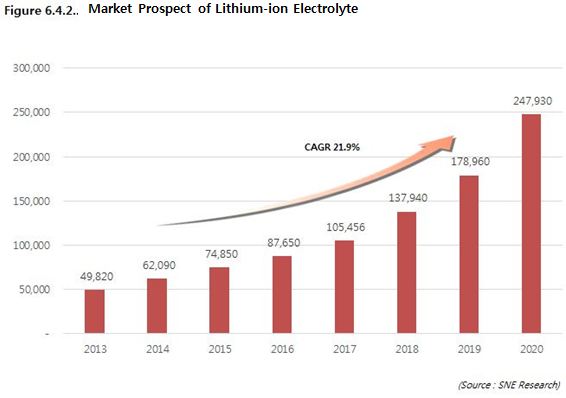